You can experience #tweetscapes not only as an audiovisual live stream here on the HEAVYLISTENING website, but also as an immersive surround installation, or even as a live concert.

In each case, #tweetscapes is 100% live and in real-time. All the sounds and visuals are created from what’s happening on Twitter right now. This makes every performance a totally unique, unpredictable improvisation.

Immersed into the stream.

Listening to #tweetscapes online is great. But if you really want to dive into that ocean of sounds, you should visit one of our installations. We call them #tweetspaces.

A #tweetspace consist of a huge projection of the visuals and four to eight speakers that create an immersive surround experience. Your virtual listening position is located in the middle of Germany, and the tweets occur all around you – tweets that sound behind you were sent from the south, and those you hear in front of you from the north of the country.

Any form of #tweetscapes is always interactive, so feel free to use your mobile phone and Twitter client to add your own voice to the soundscape.

We exhibited #tweetspace many times, for example at the seminal Sound Art exhibition at ZKM Karlsruhe that ran throughout 2012, or at the CyberArts exhibition at OK Linz where the winning projects from Prix Ars Electronica 2012 were presented. At ZKM, Tarik even set up surround visuals, using four projections. 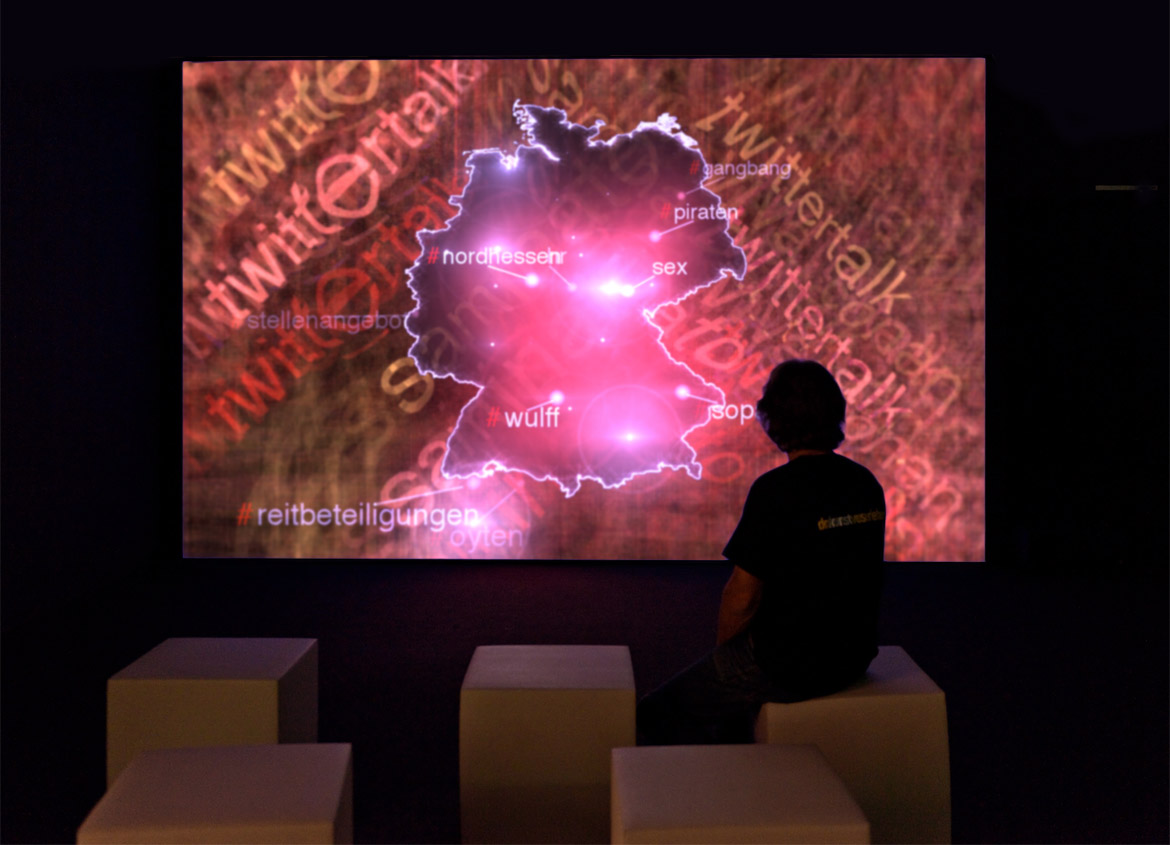 #tweetscapes is more than a treat to the senses. Watch and listen closely for a while, and you will gain a better intuitive understanding of how the social web works. It is a perfect tool for illustrating the magic and the power of the online dialogue. This is why we regularly show #tweetscapes not only at art exhibitions, but also at conferences and other events that deal with the future of the internet – for example at re:publica in Berlin.

Want #tweetscapes for your event? Get in touch

Even though we made #tweetscapes and listen to it a lot, we are still fascinated and often surprised by the variety of the audiovisual worlds it creates. When we play live #tweetscapes concerts, we let the current mood of the Twittersphere inspire us. We use #tweetscapes as the source material for improvised audiovisual live shows that depend completely on what the people of Germany tweet about at that moment.

We also like to throw other elements into the mix. For example, the first #tweetscapes live concert at Berghain club was joined by a full live band led by Jochen Arbeit of Einstürzende Neubauten, adding an irresistible groove to the Twitter sounds, making it possible for the first time ever to actually dance to a Twitter stream.

When we played Berghain, we reserved a special sound for the #Berghain hashtag – a massive bass drop. So whenever someone mentioned the event on Twitter, the club’s sound system went BOOOOM. You could of course do this from the middle of the dance floor, using your mobile phone.