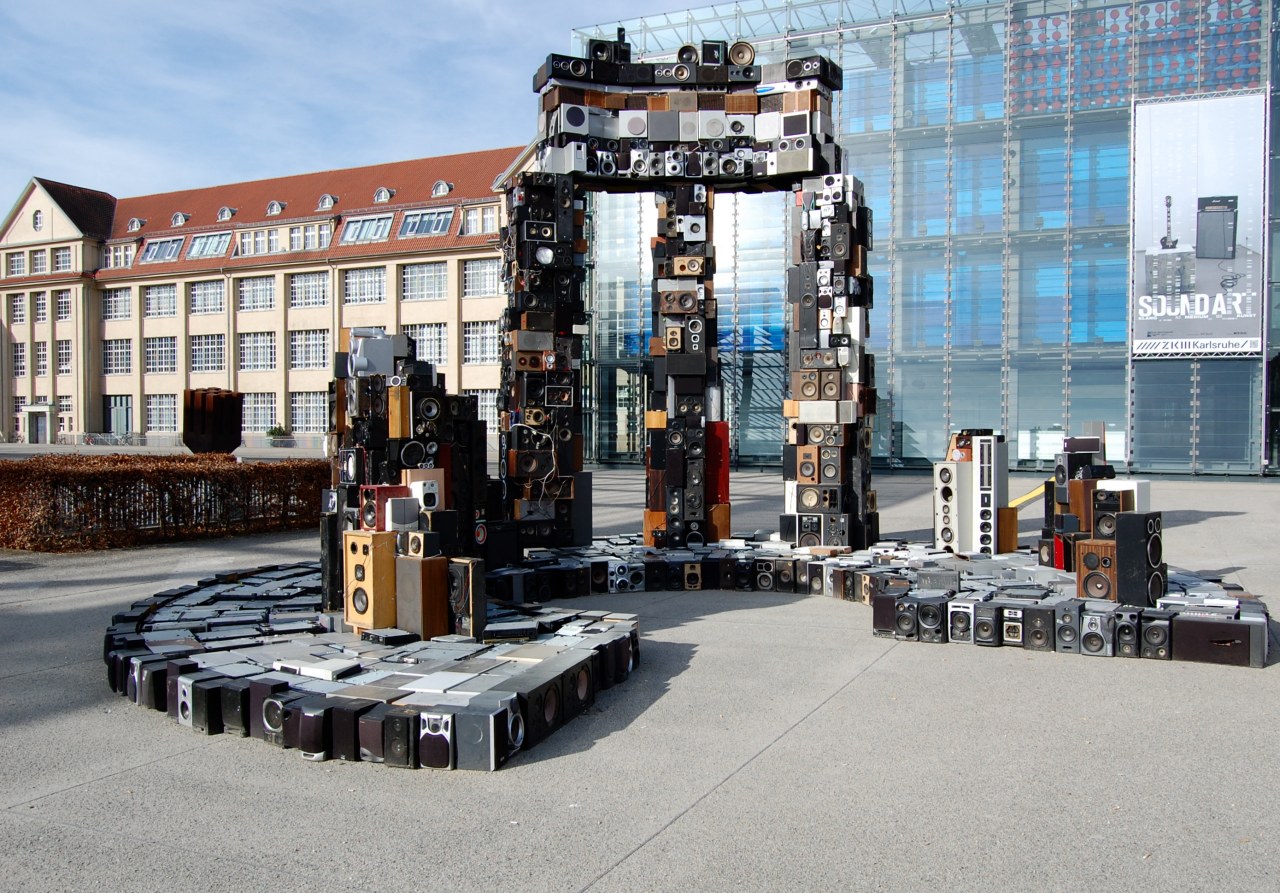 Meet TEMPLE, an installation by Benoit Maubrey, made of loudspeakers. It’s placed in front of ZKM Karlsruhe as part of the ongoing Sound Art exhibition, which we’re also part of.

Tonight at 21:00 and 23:00 it will be used to play #tweetscapes live. You can use some special #hashtags in your tweets to influence the concert, like #SoundArt or #ZKM. It will work from anywhere in Germany, you don’t have to be there. You can even send a tweet including #Stille (#silence) to make it shut up for a while.

But that wouldn’t be very nice during a concert, would it?

It’s a bit surreal, but also true: Our #tweetscapes project, which converts all German Twitter messages into sounds and images in real-time, has received an Award of Distinction in the “Digital Musics and Sound Art” category of Prix Ars Electronica 2012.

In each category, there’s the Golden Nica, and two Awards of Distinction, making them the silver medals of the Prix Ars – “one of the most important awards for creativity and pioneering spirit in the field of digital media” – which received over 3600 submissions from 72 countries this year. HEAVYLISTENING is in excellent company from now on: Karlheinz Stockhausen, Maryanne Amacher, John Oswald, and Curtis Roads all came in second in their respective years, too. (also Julian Assange, but not really in our category).

It’s been a crazy year since we kicked off HEAVYLISTENING with TIEFDRUCKGEBIET, our (also award-winning) mobile sub bass concert. We’ve never had this much fun before and we’re receiving such an incredible amount of attention and positive feedback that we started to think we must be doing something right.

A huge thank you for your support to everyone – especially to our friends (yo Bayse!) and relatives (who didn’t get to see us much in the last year) and of course the people who gave their time, knowledge and enthusiasm for #tweetscapes and made it a success: Tarik, Florian, and Timm.

Thanks alot also to Deutschlandradio Kultur (aka Marcus), and CITEC Bielefeld (aka Thomas) for starting this project in the first place, and of course to Sound Studies at Berlin University of the Arts – especially our brilliant teachers Sam and Robert.

So much for the official part. May we now say: WE FUCKING WON!!! BÄÄÄÄÄM!!!

Our quest for giving ol’ sound art a proper pop makeover has just begun. HVL003 is on the way!

We’ve added some special #hashtag sounds to #tweetscapes for re:publica 2012.

There are 8 Stages at the conference and each stage has their own hashtag – so we thought: Hey, an octave also has 8 notes, and our favourite sound chip has 8 bits… So, the special #rp12-sound is an 8 Bit note from an old 80s sound chip, and the stage-specific hashtags #rp12stage1, #rp12stage2 etc. can be used to play melodies on top of this #rp12-ostinato. Give it a go on #tweetscapes.